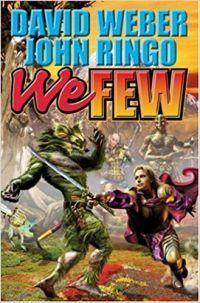 Prince Roger MacClintock was an heir to the galaxy's Throne of Man - and a self-obsessed spoiled young brat...until he and the Royal Marines sent to protect him were stranded on Marduk with only their feet to get them half way around the entire planet. So far, they've traversed a continent, crossed a sea full of ship-eating monsters, taken over an enemy spaceport, and hijacked a starship. But they're not home-free yet, because home is no longer free. In Roger's absence, a palace coup by enemies of the MacClintock family has seized control of the Empire. His mother the Empress is a captive in the palace and even in her own body, drugged so that her will is not her own. Roger's brother, the heir to the throne, is dead. And Roger himself has been branded an outlaw and traitor. Roger and his faithful band of human marines and native allen warriors have beaten the barbarian planet Marduk. Now they must re-conquer an interstellar empire. But they aren't about to give up, and once again a lot of power-hungry people are going to learn a hard lesson: You do not, ever, mess with a MacClintock!

Prince Roger is home, now to get back his empire
October 29, 2017
Rating
4.0
We Few is the fourth and final book in the excellent Empire of Man series by David Weber and John Ringo.  Prince Roger and his team finally make it back to his world and he now finds himself needing to rescue his mother, the empress of man.
This book is pretty different from the earlier three because it is not about surviving a hostile planet against deadly natives.  Then again, Prince Roger's world is not really that different.  His mother is under the control of Roger's father by blood but not by love.
They setup a restaurant that serves Marduckin food as the perfect cover and a gain allies in order to save the empress.
This final book was pretty good at showing the evolution of Prince Roger and a good ending to the series.  There were a few memorable moments that made this a good book but not a great one.  I give it four out of five stars.

Books of the Month